Are Eyes the Only Way to Seek the Truth?

Today I want to focus on a painting that I made during a livestream on YouTube in January of 2021. In my eyes, Posterized Stimulation II is a portrait painting that combines abstract and figurative forms.

This painting is available for purchase on my gallery website in the 2021 painting section, or it can be directly accessed via this link.

The Posterized Stimulation is a series of new paintings that explore different shades of green as well as the perception of color in the paintings.

The primary effects of the color green on our body are widely known and used in advertising, psychology, and in our approaches to nature. Green colors are calming, stress-relieving, and generally have favorable effects upon our bodies.

These paintings combine blurred elements, patterns, and soft lines, through delicate mark-making and pure interpretations of elements that intensify the perception of green in our bodies. Some of these could be calming and carry the vibration of growth, whilst some might bring an uneasiness that leads the viewer to browse around the painting, searching for unwinding significances.

Every painting made with tones of green is unique and different. This fact sets these oil paintings apart from other series of artworks that I have painted.

You can purchase this painting in my gallery website: Posterized Stimulation II, oil on canvas, 40x30cm (16x12inches), 2021

When I was about eight years old, Polaroid cameras were at the peak of their popularity, and then suddenly disappeared. I experienced them for a short time. This form of photography was unique because it gave a false impression of reality and its color tones. The pictures appeared to be much older than what they were actually capturing.

When I began painting Posterized Stimulation II, I was inspired by this type of photography. My goal was not to paint what one could depict in a photo, but rather base the painting upon the impression of what I saw in the picture. In my eyes, the green colors that I used helped me to achieve this notion.

What does posterization mean?

To be considered posterized, a photograph or image (pictures, etc.) must use only a small quantity of various colors and tones.

Posterization of an image entails a continuous gradation of hue to several areas of fewer tones, with sudden changes from one color to another. This was initially done with photographic methods in order to create posters for advertising. Creators can now do this photographically or with digital image editing. Posterization may be intentional or an unintended artifact produced by value quantization.

What was the process of creating the portrait painting Posterized Stimulation II?

The painting Posterized Stimulation II was created during a live stream on my YouTube channel. For this painting, I decided to focus on green tones and patterns. This portrait was painted in a single session, which helps understand the process behind making this piece.

How important is the depiction of eyes in the painting? What does the lack thereof mean in an artwork? 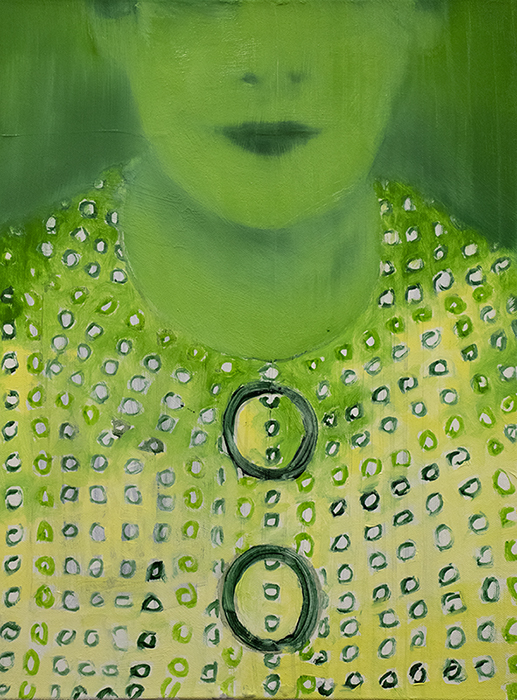 Throughout the history of art, eyes were vital aspects of both portraiture and the person in the painting. We recognize each other through our eyes and are able to connect on a metaphysical level, whether in real-time or through art. Through our eyes, we can sympathize and observe.

Oftentimes, an art piece that depicts eyes will catch our attention first. Eyes in paintings are the element through which we create a psychological portrait of the person. We can fabricate stories and connect (or disconnect) on an emotional level just from seeing the eyes.

They can give the impression of clairvoyance, which is the alleged intelligence that enables one to obtain information about an object, personality, location, or physical appearance through perception.
The eyes can also portray the concept of omniscience, which is the potential to understand all of the things around us. In monotheistic religions, this is a property exclusive to God. In other religions, omniscience is a characteristic that any person can ultimately achieve.

Other characteristics that eyes are commonly linked with are intelligence, knowledge, diligence, having pure morals, and truthfulness. Looking into another person’s eyes could be a sign of honesty and trustworthiness. Eyes often symbolize wisdom and power.

But what does it mean if the figure in a painting does not have eyes?
When there is a lack of eyes in the painting, then we look for a substitute focal point that gives us an impression of what the eye could have said to us.

The face depicted in the painting Posterized Stimulation II does not have eyes. The head is included, but only in a three quarter view, and it is blurred and integrated with the background.

How important is the depiction of pattern in Posterized Stimulation II?

Most of the space in Posterized Stimulation II is occupied by a loosely-depicted pattern.

The pattern in this painting presents a sense of order in what might otherwise appear chaotic. The viewer has a chance to understand and identify recurring ornaments that allow observers to make knowledgeable guesses, opinions, and create systems and conditions about the person in the portraiture. It is a way to find logic that otherwise would have been created by the depiction of eyes.

Patterns create regularity in a painting. They allow us to recognize designs that we are familiar with. Through this, we are able to connect with the depicted person. We can create a sense of stability and establish a connection through that which we imagine we saw in the eyes.

Painting of the Day is a series of posts about my artwork. It is one of the ways I can connect my paintings to viewers like yourself. Every Monday, you can check my website for a new post that is a reflection on one of my paintings. You can find these posts on my website.

As of today, Posterized Stimulation II is available to purchase on my gallery website. It can be found directly under this link here.

If you would like me to write a blog post about a particular painting you like, please send me an email and let me know. Per your request, I will write about the concept, story, and meaning behind it for my Painting of the Day series.

Feel free to check out my previous posts. I posted a new blog post about Ten Starts from One, which is a piece that I painted in 2017 after my fellowship residency at Fondazione Perl Arte in Rome, Italy. This painting is in a private collection, and it is one of my favorite pieces. You might also be interested in reading about I don’t know what to call you III.

Painting of the Day: Ten Starts from One

Painting of the Day: I don’t know what to call you III