Today’s Painting of the Day focuses on an oil portrait painting titled Paramount of Eternity 10 that I produced for a solo exhibition at the Brownsville Museum of Fine Art in 2019. You can view pictures and read about this exhibition here.

Paramount of Eternity 10 is an oil on panel. The size of this painting is 25x20cm (10x8inches). The panelboard was primed with three layers of cold gesso and sanded with the use of balsamic turpentine.

This painting is unlike the other portrait paintings I did for this series because it just portrays hair and not a face like the rest of the artworks do. For this reason, Paramount of Eternity 10 stands out and has become my favorite in this series.

You can view pictures from my solo exhibition where I presented them all here. The show took place at the Brownsville Museum of Fine Art in Brownsville, TX, in 2019.

Below you can read my thoughts on the painting and the process of creating the piece. I hope you enjoy it. This oil portrait painting is available to view on my gallery website here.

What was the inspiration for the Paramount of Eternity exhibition?

The main inspiration for this painting were pictures that I found at the alumni house at Williams Woods University in Fulton, Missouri. I went more in-depth about it in my previous post, explaining the reason and meaning behind this, so if you are interested in finding out its story in full, please see my earlier post.
Another story regarding Paramount of Eternity (this is the title for the solo exhibition at the Brownsville Museum of Fine Art) was the inspiration loosely based on the ancient Greek myth of the King of Corinth, Sisyphus. The story, in a nutshell, was that Sisyphus incurred the wrath of Zeus for informing the river god, Esopus, that a mighty eagle had carried his daughter, Aegina, to a nearby island. When Zeus learned what Sisyphus had told Esopus, he sent the king to Hades to forever roll a large stone uphill only to have it fall back on him before he could manage to place it on top of the hill.

Under what circumstances did I create “Paramount of Eternity 10?”

I moved to Dallas, TX, at the end of 2018. I rented a studio in November, and it took me several months to get the space ready whilst painting and getting ready for two solo exhibitions scheduled for 2019. It was a hectic period in my life that I look at with a dose of humor. In this series of small oil portrait paintings, my goal in the studio was to complete each of these panels in one session.
I find these artworks to be very loose and intriguing at the same time.

What is the meaning behind the hair in this oil portrait? 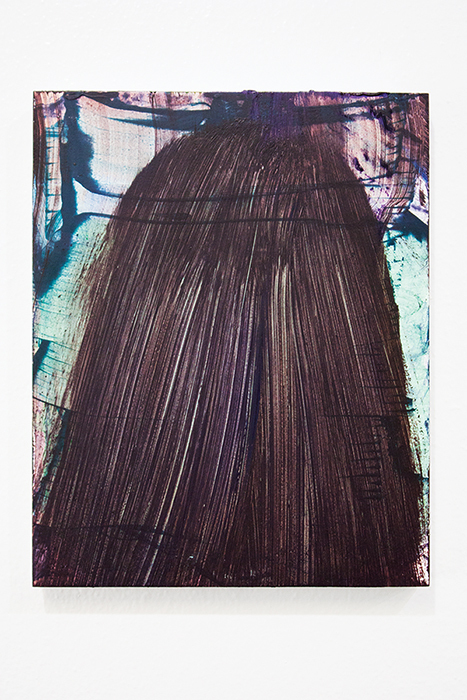 The hairs in this painting are painted almost as if they happened by accident. However, the image gives the viewer a sense of urgency and intensity, bringing us to the meaning that hair can convey.
Hair signifies natural strength and masculinity. The characteristics and features of each of us can supposedly focus on our hair and nails. However, it is a symbol of intuition and could also represent female seduction and attraction.
Flowing hair can depict freedom and looseness; the forced removal or loss of hair may symbolize the state of being deprived of power, and I will get to this in a minute.

How does “Paramount of Eternity 10” refer to the Biblical story of Samson?

Samson was a legendary Israelite warrior and judge, a member of the tribe of Dan, and a Nazirite. His immense physical strength, which he used for 20 years against the Philistines, derived from his uncut hair.
Delilah asked Samson three times the source of his strength, and he gave her three wrong answers. She then “pressed him daily with her words, and urged him, so that his soul was vexed unto death,” as the King James Version Bible puts it. He told her that shaving his head would make him weak.
Samson pushed over the pillars of the temple of the Philistine God Dagon, destroying the temple, and killing himself and thousands of Philistines.

What was the secret of Samson, and how does the representation of hair refer to an oil portrait of a woman?

Samson held remarkable physical power, and the moral of his story narrates the unfortunate loss of his ability to the destruction of the Nazirite buildings, to which he was bound by his mother’s consent given to an angel.
He first broke his moral commitment by feasting with a woman from the nearby town of Timnah, who was also a Philistine, one of Israel’s enemies, and there is much more to the story.
As he dreamed, Delilah had his hair cut and tricked him. He was caught, blinded, and controlled by the Philistines. However, God granted Samson his revenge by allowing him to destroy the Philistine temple of the God Dagon in Gaza.
The oil portrait painting representing hair is as intriguing as the story about Samson. By looking at the painting, I can see and refer to the stories that reflect the meaning of the hair and its importance in the way we portray ourselves

There are many more angles through which I can talk about Paramount of Eternity 10 oil portrait painting, but then I would deprive the painting of complete mystery just like Delilah took the power from Samson. Therefore, I am going to leave most of the conclusions and interpretation to you.

This painting is available for purchase on my gallery website.

Painting of the Day: I don’t know what to call you III