Painting of the Day: Ten Starts from One

The story behind today’s installment of the Painting of the Day series is very close to me. I grow up in Poland and the concept upon which this painting is based has some roots in my culture. I did not grow up during these changes, but I am a product of the Soviet Union ideology and it has influenced my life in one way or another.

What is the story behind Ten Starts from One? 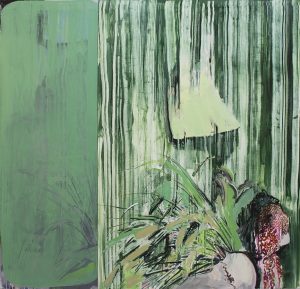 I created Ten Starts from One in 2017. It refers to the Soviet Union propaganda posters of women which were encouraging women to work for the country and tried to force a new ideology of ideal female representation upon them. I found these portraits to be very interesting. When I came to the United States, three years before creating this painting, I was shocked and amused by the news and propaganda in the States.

I’ve never thought this to be possible, but what I saw and heard in the news was sometimes exaggerated or misleading.
That led me to think about the poster propaganda that was exhibited not only in the Soviet Union but across the world.

It made me realize that the messages are the same, but the circumstances and ideologies are attached differently.

What was the inspiration for the painting?

The inspiration for this painting was a propaganda poster depicting a woman holding grains and looking towards Stalin as the father of Russian land. It was a very striking image.

Ten Starts from One is 184x190cm and focuses on green tones. The selection of colors is earthy but symbolic.
This painting was shown in Fulton, Missouri for my solo exhibition under the same title as painting.

Who Were the Superwomen of the Communist State; from Working Women to Art Superstars?

Culture, art, and politics change the way society functions as well as the roles we play. The relationship between art and politics can be an innocent one or on that triggers complete and utter destruction.

After the era of Tsarist rule, there was a sudden retreat from tradition and a complete transformation of Russia began, as well as the bringing of a new meaning to being a woman.

A woman, in the ideology of Lenin and later Stalin, emerged as hope for introducing new order to politics, culture, and art.

On the other hand, a woman was uncontrolled, unpredictable, and often sympathetic to the church, supporting established Orthodox values.

It was necessary to create a new woman – a superwoman. The government made education possible, allowed the pursuit of professional activities, and permitted active participation in politics for all women. However, many Russian women did not ask for these rights, and equality did not mean salvation for everyone. Women had to make room for a lot of new responsibilities without being able to give up their previously assigned household duties to anyone.

Unaware of their role in this newly opening chapter of history, these women were immortalized with courage and looked to the future – brave and full of energy. The men decided that women would work jointly with them to create order in a devastated and depleted country, and those with either greater or lesser enthusiasm had to accept the challenge.

With the enormous influence that Russia had in eastern Europe, this ideology smoothly spread by using the available tools of propaganda. It intended to present a new model of femininity through art.

At first, propaganda art was associated with something sublime, abstract, and beautiful, but then reduced to just being an information path for which career a woman should choose. Posters were a favorite way to deliver messages and celebrate triumphs in an illiterate country.

Over the years, every possible direction was taken over by the Stalinist authorities and precisely defined what could be shown to the public, and how the characters presented to a wider audience should look and behave. It deeply affected art and artists who often had to create against their own ideology and morals in order to line up with the goals of the Communist party.

Hardly anything in art had nothing to do with the political situation and/or being a direct fulfillment for the visions of those in power.

The ideology of the Soviet Union shaped the perception of femininity to such a great extent that it changed the thinking and roles of women in society during and after the fall of the USSR.

What is Socialist Realism?

Socialist Realism is a form of idealized realistic art developed in the Soviet Union and approved by the communist party between 1932 and 1988. It was a model for art in Russia and other socialist countries after World War II.

Socialist Realism is the terminology adopted by the communist party for work produced by artists that included painters, printmakers, photographers, sculptures, writers, and filmmakers.
The aim was to draw awareness to the sociopolitical conditions of the working class and act as a method for critiquing the power structures created by these conditions.

What were the ideal characteristics for a woman in a Socialist poster?

Focused and ruddy, but enthusiastic. Strong and brave, though sometimes passive. Often at the side of a man who holds her hand on his shoulder in a supportive gesture – armed with a male uniform concealing female attributes, such as tender breasts, waistline, the roundness of the hips, and slender legs. Even the unruly hair that normally pragmatically fluttered in the wind often hid under a tied headscarf.

Grabbing the privileges thrown at them by the men, the women did not notice that they were taking on additional roles that would be difficult to deal with. They just became wives and mothers as well as laborers who work hard for their bread and support the often lost men who, decimated by wars, have been deprived of their masculinity.

This representation was the depiction of women delivered in painting, sculpture, and posters, and became a general cultural model during Communism.

How were women presented in Socialist Realistic art? 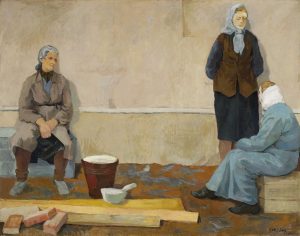 In the Stalinist era, hardly anyone could afford the luxury of being a woman. Besides, Stalinism did not allow for luxury.

Women immortalized in paintings such as Ceglarki by Aleksander Kobzdej are focused on work. In Jerzy Skarżyński’s illustrations for Przekrój, they listen to men’s discussions about the system, but they are mute and focus on performing their best roles.

In most art representations, women are simply standing next to each other, as in the painting by Andrzej Strumiłło Our Land. In this piece, a man and a woman look in an undefined direction, standing against the background of a village ideal for those times, in which a tractor was present, of course.

Their usefulness, measured by their diligence and dedication to higher goals, is gaining importance. There is no room for vanity and coquetry. It is condemned by nature.

In Wojciech Fangor’s Character, a carefully dressed woman symbolizing Western-style stands alone while her partner hugs a worker. It’s hard to ignore the impression that the woman looks at the other elegant woman with a hint of envy.

What about the individualism of the superwoman in USSR paintings?

There is also no room for individuality in Socialist Realism. Women are like each other; monumental and powerful, as if they were carved in wood. The boundary between subtle and feminine facial features and the characteristic appearances of men is blurred.

In Włodzimierz Siewierski’s painting The Oath, women look like men and children look like adults. They are all universal and created so that every citizen can identify with each one of them.

There is also room for rebellion or works that can hardly be called programmatic. The sculptures by Alina Szapocznikow, Difficult Age or First Love, for example, show a young woman wearing a headscarf, standing naked, dazzling the viewer with her femininity in a surprisingly provoking pagan statues of a woman and mother. She stands upright proudly and is clearly happy with herself.

What do we think about Social Realism art today?

Today we look at these pictures with pity and take their meaning with a grain of salt, displacing the fact that they were present in the lives of the inhabitants of eastern and central Europe for several decades.

There is a lot of resemblance here with the West, but it cannot accelerate some changes into happening sooner. Since the war, women have always been a pillar of society. They had to find themselves again, taking on many duties. This image of a woman is hidden into our consciousness. Maybe it was not placed there by propaganda posters, but rather by equally artificial advertisements.

Meanwhile, femininity continues to be at a crossroads. Today, women are not afraid to speak up and are not afraid to achieve their goals. The problem is that it is easy to fall into another trap, this time adjusting to the stereotypical image of a successful woman who, whilst wearing a suit and high heels, navigates between office buildings, holds a child on her hip and a smartphone in her hand. But I can’t speak for that, as I am not a woman.

Painting of the Day

The painting of the day is a series of blog posts that explains my artwork to the reader. It is a presentation of the concept, ideas, and inspiration behind the painting.

If you have missed previous posts, you can find them all here.

Tags: painting of the day, ten starts from one

Painting of the Day: Posterized Stimulation II: Are Eyes the Only Way to Seek the Truth?