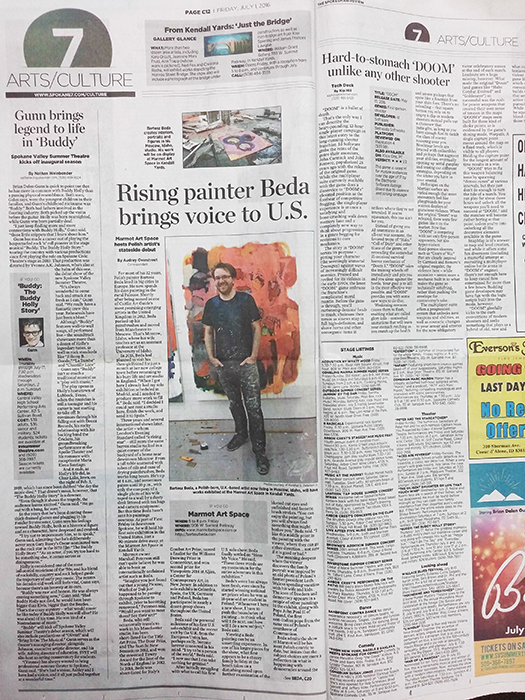 From Poland and England, Bartosz Beda is an artist on the rise

For most of his 32 years, Polish painter Bartosz Beda lived in big cities in Europe. He now spends his days painting in the rural Palouse. Shortly after being named as one of Caitlin Art Guide’s most promising emerging artists in the United Kingdom in 2012, Beda packed up his paintbrushes and moved from Manchester to Moscow. That’s Moscow, Idaho, where his wife teaches art as an assistant professor at the University of Idaho.

In 2013, Beda had planned to visit his then-girlfriend for just a month at her new college town before returning to his busy life and art studio in England. “When I got here I already had my solo exhibition scheduled in Madrid, and I needed to produce more work to fill it,” Beda said. “I decided I could just rent a studio here, finish the work, and send it to Spain.”

Three years and several international shows later, the artist – who London’s Evening Standard calls “a rising star” – still rents the same barren studio tucked in a quiet corner of the backyard of a home near downtown Moscow. From a tall table scattered with tubes of oils and cans of drying paintbrushes, Beda works long hours. He’s up at 4 a.m., and sometimes paints until 10 p.m., with only the company of a single photo of his wife taped to a wall by a dusty desk littered with tea bags and camera equipment. But this time Beda hasn’t sent his paintings overseas. As part of First Friday in downtown Spokane, he will hold his first solo exhibition in the United States, just a 90-minute drive away, at the Marmot Art Space in Kendall Yards.

Marmot owner Marshall Peterson still can’t quite believe he was able to book an internationally acclaimed artist such as Beda.

Beda, who still occasionally travels to work in his Manchester studio, has been short-listed for the Title Art Prize, The Door Prize, and The Saatchi New Sensations 2012, and won the esteemed Towry Award for the Best of the North of England in 2012. In 2014, Beda was short-listed for Italy’s Combat Art Prize, named a finalist for the Williams Drawing Prize in Connecticut, and won second prize for Viewpoints 2014 at Aljira, a Center for Contemporary Art, in New Jersey. In addition to solo exhibits in Colombia, Spain, the UK, Germany and Poland, Beda has participated in nearly a dozen group shows throughout the United States.

Beda said the personal milestone of his first U.S. solo exhibit and the recent exit by the UK from the European Union has, perhaps sadly, become forever connected in his mind. “I try to be a person of the world,” Beda said. “I now see that I can take nothing for granted.”

After initially struggling with what to call his first U.S. solo show, Beda finally settled on “Hear My Voice.” He said, “These three words are my momentum for the entire adventure in this exhibition.”

Beda’s voice has always been fresh, ever since he started winning national art prizes when he was an 18-year-old art student in Poland. “Whenever I have a new show, I have to push the boundaries of painting … to think what will I do next, and how will I do a new subject,” Beda said.

Viewing a Beda painting can be an unsettling experience. In one of his larger pieces for the show, what first appears to be a cheery family holiday at the beach takes on a disturbing mood upon further examination of the blotted out eyes and unfinished and frenetic brush strokes. “You can enjoy the painting, but you will always find something that might bother you,” Beda said. “I like this middle point in the painting with the viewer, where they can go either direction … not sure if it is good or bad.”

The meaning deepens when the viewer discovers the family portrait was inspired by an old photo of Poland’s former president Lech Walesa spending vacation with his wife and kids. The icon of freedom and democracy appears in a couple of other paintings in the exhibit, along with Pope John Paul II of Poland, the first non-Italian pope from the same era of Poland’s overthrow of Communism.

Beda admits the show at Marmot will be his most Polish-centric to date, but insists that the subject choices are more a reflection on what is happening with democracies around the world than a nod to his own personal history. “I don’t know. It could be also a representation of my own transformation or integration with new challenges in the United States,” Beda said.

While much of Beda’s work contains political references, often he finds inspiration through simple internet searches. “I go through hashtags on Twitter or Instagram, and if I find something unusual, than I just type the words in Google and see what kind of image source I can get,” Beda said. “So when I lived in Germany, I was translating Polish words into German, then from German into English, from English back to German, and I always get different results. It’s never defined that this means that.”

Beda’s energetic style, his decisions on what parts he defines and where he smears his paint, produces beautiful objects in themselves. His portraits sell in Europe as fast as he can create them. But, according to a 2013 article in UK’s MoneyWeek magazine titled “Six Rules for Spotting Great Art,” Beda refuses to rest on his laurels. “It would have been very easy for him to continue to create similar works,” according to MoneyWeek. “(But) he has deliberately challenged himself to evolve his practice.”

Beda doesn’t shy away from pursuing greatness through his art. “There are a lot of great painters but only few between them who are really trying to understand what painting is or how a painting can be changed to still keep it fresh as a medium,” Bartosz said. “Finding new ways of reinventing myself is really important.”

Hopkins Center for the Arts: Interview and Images